Pradeep Guragain Follow Pradeep was born and bred in Nepal and is a seasoned hiker and rider. With a passion for self-drive road trips, he will just head off at a moment’s notice for trips, either long or short. Scuba diving is another passion he loves to pursue. As for the future – “I dream of living in a farmhouse close to nature, and far from cities.”

Ultimate Guide To Trekking The Annapurna Base Camp Trek 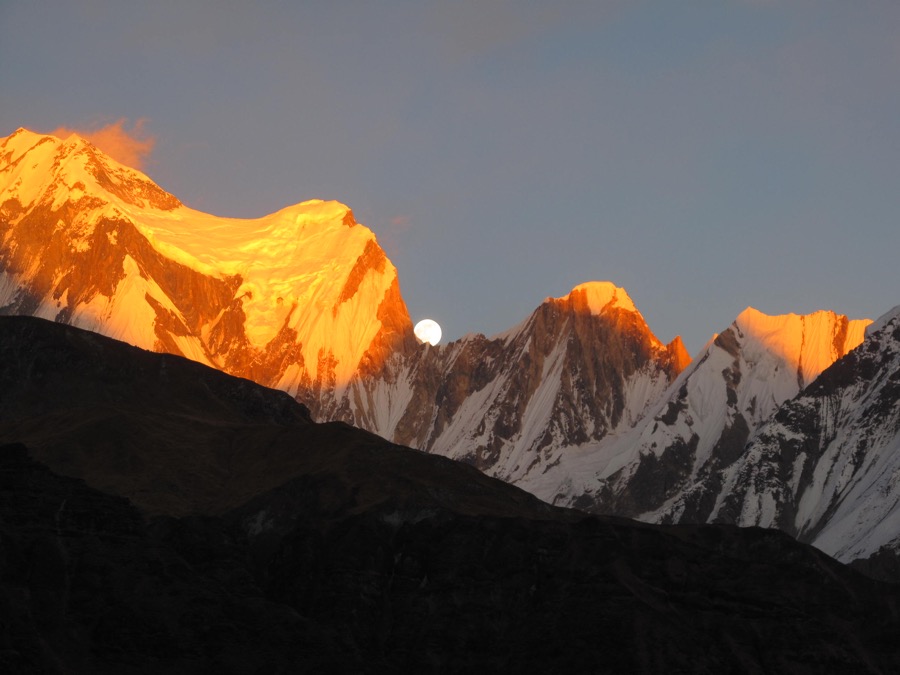 For many people Nepal means Mount Everest. But for those who have ever been to Nepal, whether for trekking or general sightseeing, what they take away with them is the majesty and magic of the Annapurna mountain range. Annapurna means ‘goddess of plenty’ in Sanskrit. And that has to be an understatement! Annapurna itself is not just one but four peaks. And there is not just one trekking route through this ever changing landscape but enough to keep everyone happy from the novice trekker to those with a lifetime of experience.

Regardless as to which trek you take Annapurna base camp, Annapurna circuit, or one of the treks that takes you into Upper Mustang and other connected areas, you will find yourself instantly in the heart of the mountains from Day 1! In fact for those of you after a more relaxed experience by exploring the lakeside town of Pokhara, you will find yourself dominated by Macchapucchre without hiking at all!

In this blog we will be looking at the Annapurna base camp trek. Also known as the ABC trek, Annapurna sanctuary trek and Annapurna south trek. Yes, these are basically the same trek!

Aside from the mountains the trails pass through Gurung villages, terraced farmland, forests, including those famous rhododendron bushes, over fast flowing icy rivers and passed waterfalls and deep gorges. The highest point on this trek is 4130 m at Annapurna base camp. So while this is considered ‘high altitude’ being that it is a gentle increase in altitude, altitude sickness should not present the majority of trekkers with problems.

And btw, if you are thinking of doing the Annapurna circuit trek, that is completely different to the ABC or Annapurna sanctuary trek!

Annapurna is the best loved trekking region in Nepal for two reasons the mountains and the ease of access.

To start the ABC trek, you need to travel to Pokhara. Pokhara is a wonderfully relaxed lake side town which also has a vibrant nightlife as well as interesting sightseeing options.

Although only 210 km from Kathmandu, it takes considerable time to get there. Don’t be fooled by the low mileage figure! By road it will take you around seven hours! By flight it will take you 20 minutes! You need to balance the time involved by road by the money involved in flying!

From Pokhara it’s then a short ride to the start of the trek.

Depending on whether you take a tourist bus or a private car the cost will vary from USD 8 per person to around USD 140 for a car. The time is the same, approximately seven hours including a lunch stop.

There are several airlines that fly Kathmandu to Pokhara. It will cost around USD 110 per person and take 20 minutes. Morning flights are best and it’s like getting a free mountain flight!

Getting To The Start Of The ABC Trek

You can start the ABC trek from either Naya Pool or Phedi.

To either of these places you can take a local bus from the Zero Kilometer or Baglung bus park or a taxi from anywhere in Lakeside Pokhara.

Should You Go With Or Without A Guide?

While some treks in Nepal, such as treks in the Manaslu and Kanchenjunga, make it compulsory to take a guide (Basically for your own safety in remote areas), you are not legally bound to take a guide for trekking in the Annapurna.

If you buy a good map, be sensible, and take information from the guest houses along the trails where you will be eating and sleeping, it is entirely possible. You can also stock up on your own supplies for the trek in Pokhara or Chomrong on the route.

But like everything, there is an upside and a downside to trekking without a guide.

Pros Of Having A Guide

Cons Of Having A Guide

Another reason why the Annapurna is such popular trekking destination is there is so much choice of routes. You can make your trek as long or short as you chose from 8 to 12 days. Or even shorter if you wish to only trek to Ghorepani Poon Hill.

There are several starting points also depending on your interest.

If you have more time, I recommend including the Ghorepani Poon Hill section into your ABC trek. This is for two reasons. Firstly, it gives you more time to acclimatize. Secondly, why miss the great views from Poon Hill?

Here is the itinerary of the ABC Trek which includes Ghorepani Poon Hill:

It will take you eight days to trek from Pokhara to Annapurna base camp and back to Pokhara. This is great for those with limited time. On the down side there is an almost 1000 m rise in altitude between Deurali and Annapurna base camp so I would recommend doing this trek alone only if you are experienced and comfortable with altitude.

Here is the itinerary of the ABC Trek which excludes Ghorepani Poon Hill:

I suggest if you are trekking independently you buy a map. In the meantime here is a link to an online map to help your plan your trip, but do not rely on the online map when you are trekking. Internet or power to charge your phone may not be available in all areas.

How Difficult Is The Annapurna Base Camp Trek?

Despite what some agents may advertise, there are no really ‘easy’ treks in Nepal! They might well be easy for those who have lived their whole lives in the mountains or for those who are professional trail runners but, frankly, that’s not most of us!

Having said that, the ABC trek route is very well supported in terms of comfortable guesthouses with facilities such as telephones, hot showers and good food. The trails are well marked and there should be no problem in following the route (But do be aware in bad weather things may be more difficult and care should always be taken to stay on the correct path).

With the ups and downs you find on all treks in the Himalaya’s you need to be fit to tackle the Annapurna base camp trek. Not to athlete standards just not a couch potato!

Best Time To Do The Annapurna Base Camp Trek

While some people do trek this route throughout the year I belief it is best NOT trekked in the winter. With the high level of snow and freezing temperatures and some higher altitude lodges being closed as the locals make their way to Pokhara or Kathmandu for the winter, things can also be logistically difficult.

Definitely the best time is Autumn and Spring. That is September to November and March to May. Naturally the trails will be busier at that time but that also makes for good company and conversation in the evenings.

For those die hard trekkers, it is possible to do this trek during the monsoon (summer) but be aware of slippery trails and leeches!

Note: There is a potential avalanche hazard in between Deurali and Fishtail Base Camp, so try to cross the area early in the morning. Always listen to local and ask for advice.

Accommodation & Food On The ABC Trek

This is probably the oldest commercial trekking route in Nepal. And the best loved. As a result the guesthouses, usually called teahouses, are some of the best in the country. As far as Chomrong Village the teahouses are in local villages. Further up the train the teahouses have been built specifically for trekkers.

Although some of the lower teahouses are very comfortable, expect basic standards as you move further up the trail. Most sleeping rooms are equipped with two beds, but some may sleep up to eight. The mattress will be thinner than what you are used to and they will supply a pillow and blanket. But bring your own sleeping bag! For both warmth and hygiene.

As the cost of sleeping in a teahouse is relatively low, the owners make income off the food. So there is a rule, which will be enforced (!) about eating where you sleep. To avoid unfair competition, each teahouse serves the same menu and prices, as regulated by the authorities. Despite this, the food is surprisingly good. And dal bhat comes with unlimited refills! Do expect the prices to increase along with the altitude!

As rule of thumb, carry around Rs 2500 to 3000 per day to cover accommodation and meals. This will NOT cover drinks and charging your batteries (For which there is a cost) etc. Bring more cash for these things. You will not find an ATM on the route and teahouses will not accept cards as payment. If you find you have too many rupees left over you can always spend them in the shops and bars in Lakeside or Thamel to celebrate your trek! Or convert them back at the money exchanges.

In this area mineral water is banned in order to reduce the number of plastic bottles which are left along the trails. So the alternative is to bring your own sterilizing method (drops, tablets, filters) or buy safe drinking water from the teahouses. You can collect tap water for free (but DO sterilize) or pay for safe drinking water.

Permits for Annapurna Base Camp Trek

Like all treks in Nepal you will require permits to trek to Annapurna base camp.

If you are trekking through an agency, then they will arrange your permits for you. Simply hand them two photographs and some money and they will do the rest!

If you are doing the trek independently you will need to obtain your own permits. You can do this in Kathmandu at the NTNC Office at the Nepal Tourism Board on Exhibition Road (15 minutes walk from Thamel), or in Pokhara at the NTNC Office at Dam Side (30 minutes walk from Lakeside). Simply ask for the form, complete it, and hand over your money and four (4) photographs!

For the Annapurna Base Camp Trek you need two permits:

Guided treks vary in price for the same areas depending on the number of days and the services you choose. But on average it will cost you around USD 480 to USD 550 for the ABC Trek.

If you chose to trek to ABC independently, the cost will depend on how many beers and extras you have! Some things are compulsory expenditures, like food and accommodation. Basically you should calculate USD 25 to USD 30 per day, plus an additional USD 50 for permits, USD 40 for transport. In total an average USD 290 to USD 350 for your independent trip.

It is not for nothing that the Annapurna are so well loved by visitors to Nepal. And it is not for nothing that the Annapurna base camp trek is among the most popular in the country. Suitable for almost everyone and highlighting the best that Nepal has to offer in terms of mountains, landscapes, culture and people it’s a trek that you aren’t going to forget. And of course, as soon as you arrive in Pokhara you feel like you are in the heart of the mountains because you are!

Pradeep Guragain Follow Pradeep was born and bred in Nepal and is a seasoned hiker and rider. With a passion for self-drive road trips, he will just head off at a moment’s notice for trips, either long or short. Scuba diving is another passion he loves to pursue. As for the future – “I dream of living in a farmhouse close to nature, and far from cities.”
« Plan Your Trekking In Nepal With These Online Trekking Maps
Top Things To Do In Kathmandu – List Of Great Attractions »