Yen Nguyen Follow Yen’s roots are in Central Vietnam although she studied in Ho Chi Minh and worked in Hanoi – covering both ends of the country! Working with the Animal Asia Foundation, Yen turned vegetarian so has her pulse on what vegetarian travellers want. She backpacked around Europe while based in Ireland and is currently living in Nepal with Pradeep and their two dogs. “Our dogs are part of our travel team and we take them trekking throughout Nepal.”

14 Major Festivals Of Nepal That You Should Not Miss 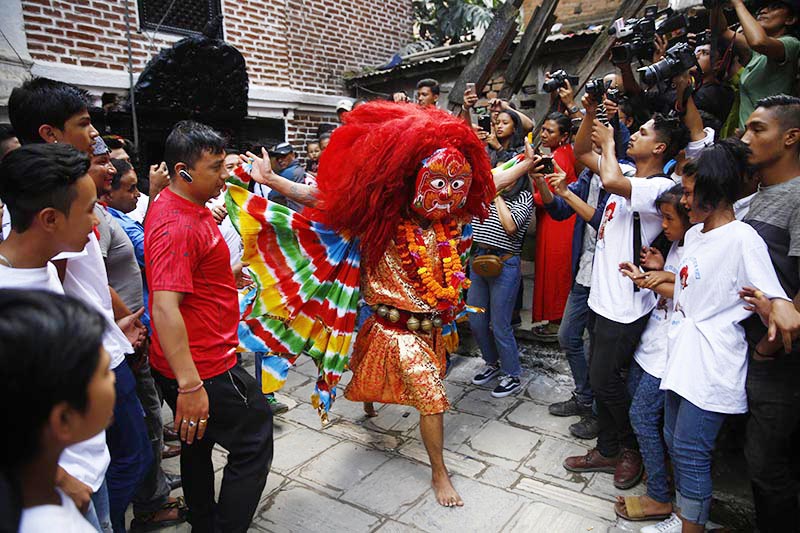 It would be pretty hard to come to Nepal and not see any festivals! There is a festival of some sort taking place almost every day. Whether it’s a major, national celebration, one particular to the Kathmandu Valley or one celebrating a household deity, it’s never ending festival time in Nepal!

Below I have detailed out some of the major festivals. But if you are heading trekking, do ask your agency or trekking guide about festivals coming up in the area you are going to.

Let’s start at the beginning of the year in the western calendar that is! You will find out that new year in Nepal is at a very different time! Please note that the time of festivals differs every year as it is usually scheduled round the phases of the moon.

Holi (Fagu Purnima) marks the arrival of spring. But in its traditional form, Fagu Purnima marks the celebration of the death of Holika who tried to kill Lord Vishnu’s devotee. Celebrated on different days in the hills (The day of the full moon) and in the lowlands and India (The day after full moon), it’s a day of fun and colour!

Water and coloured power is thrown in the air and at people. Tourists are the perfect target! Do not wear your best clothes or carry expensive electronics on that day!

Where to see the festival – In Kathmandu the best place is Basantapur. But it happens pretty much in every street.

Tamu Losar is celebrated by the Gurung community around the same time as the western calendar’s New Year.

Sonam and Gyalbo Lhosar are celebrated by the Tamang (Sonam) and the Sherpa and Tibetan communities (Gyalbo). Usually the Sherpa and Tibetan celebrations take place around or on the same days which makes it very interesting to go to Boudhnath Stupa where Tibetan and Sherpa monasteries are located. This Losar is also celebrated by peoples from the Dolpo region of Nepal. Celebrated over a week or so, there are three main days, the final of which involves coming out to the Stupa to celebrate. Tibetan, Sherpa and Dolpo people will be there in their colourful costumes and you are welcome to join in the celebrations, throwing rice into the air to welcome the New Year.

Where to see the festival – Boudha area and Boudhanath Stupa

This festival is in honour of Lord Shiva. Shiva Ratri translates into Night of Shiva. There are many legends behind the meaning of this festival. One being a celebration of Shiva and Parvati’s marriage, another being that it is the day when Shiva saved the world from poison. It is also the night when Shiva danced his heavenly dance.

This is a major festival in the Hindu calendar in both Nepal and India and attracts thousands of Sadhus from all over. They gather at Pashupatinath to smoke marijuana, preferred relaxation of Shiva! During the day thousands of devotees will go to the temple to worship. By night hundreds of young men will go to smoke! Although very crowded and confusing, it is quite a laid back festival!

Where to see the festival – Pashupatinath Temple

When – April or May

This is the birthday of Lord Buddha. Although Buddha was born in Lumbini, the main festivities take place around Boudha and Swayambu in Kathmandu where the majority of Tibetan origin Buddhist live. With the Newar (Native to the Kathmandu Valley) community there will be smaller celebrations at community level.

Where to see the festival – Boudhanath Stupa or Swayambunath Stupa

This festival celebrates the new year and is held in Bhaktapur. Chariots of Lord Bhairav and Goddess Bhadrakali are pulled through different parts of the city, and a tall pole with two embroidered pieces of clothes, representing serpents, is erected. Legend goes that husbands of a princess kept dying on the wedding night. Finally a blessed prince arrived who discovered two snakes crawling out of the sleeping princess. He killed the snakes and the princess was able to keep the next husband alive! It also marks the beginning of the new year.

Where to see – Bhaktapur

When – March or April

This festival is basically a military horse parade. There is no specific religious significance but it is believed there is a demon under the Tundikhel in the centre of Kathmandu. This horse parade on the very ground, ensures the demon does not return. Parades and exercises by the Nepal Army take place all day.

Where to see the festival – From the edges of the Tundikhel, 10 minutes walk from Thamel.

The origins of this festival date to the time King Pratap Malla lost his son. The Queen was so grief stricken about the death of her child that the king grew very worried about her. He asked every person who has lost a family member over the past year to join a procession in front of the palace, showing a picture or symbol of their lost loved one. This was to show the queen she was not alone in her grief.

From there, the festival grew into a sort of Halloween with jokes, satire, humour and those who have lost a loved one in the past year, dressing up in costumes and parading through town.

Where to see the festival – Parades take place in many places around the Kathmandu Valley. You could try the Durbar Squares in Kathmandu, Bhaktapur and Patan.

This important festival takes place in Patan. A large chariot is made from wood and bamboo from forests with religious significance. Once the chariot is constructed, an idol of Rato Machhindranath is places inside and drawn through the city. Worshiped by both Hindus and Buddhists, the idol and chariot are paraded through various part of Patan. On the final day of the festival a Bhoto or vest, is shown to the public on Bhoto Jatra. Then the chariot is dismantled and kept in a temple in Bungamati village.

Where to see the festival – Around Patan and at Bungamati village

Lord Indra is the God of Rain and this eight day celebration is dedicated to him. Legend goes Lord Indra was collecting jasmine from Kathmandu for his mother when he was captured by locals. Of course when they realised who they were holding, they were very scared and released him immediately. Lord Indra’s mother blessed them for releasing her son. And it is believed because of this blessing Kathmandu receives enough moisture to sustain itself for nine months of the year. The festival starts with the erection of a pole, Yasin, make from a single tree. The procession route goes through the historic parts of the city. Part of this Jatra is Kumari Jatra when there Goddess Kumari’s chariot is also pulled around the city.

Where to see the festival – Kathmandu Durbar Square is the main place to go.

When – September or October

This festival is only for women, when married women fast for the long life of their husband and unmarried woman fast in the hope of getting a good husband! Lord Shiva is worshipped at Pashupati during this time. The final day of the festival is where women dress in their best clothes and sing and dance in the streets and at the temples. You are welcome to join in the dancing!

Where to see the festival – Pashupatinath Temple or around local communities.

Dashain is THE festival of Nepal. It celebrates the victory of good over evil and takes place over 15 days. This is the time when families return to their parent’s homes to celebrate and visit relatives. Each day has a different meaning and different rituals to adhere to.

Unless you are in a Nepali family there is not much for non Hindus to see or do over this time. If you are in Kathmandu, you will notice there are much fewer people around as they have all left for their villages. The air will be cleaner! On the other hand, less bars and restaurants are open and not much nightlife takes place!

Where to see the festival – All over Nepal

Tihar takes place around two weeks after Dashian. So often people take a whole month off work, or so it seems! It can be compared to Christmas and New Year when even if you are supposed to be working in between, you probably are only doing so half heartedly!

Spread over five days, Tihar is a lovely festival that even non Hindus can enjoy! Again, each day sees different things to celebrate including a day when dogs are celebrated. Cows are also worshiped and the final celebration is for Goddess Laxmi, the Goddess of Wealth. Every house will put out lamps and make tiny footprints for Laxmi to follow in to the house in order to bless the household with prosperity. During this festival children and young people go round the neighbourhood singing songs in return for some treats or money.

Where to see the festival – In homes all over Nepal. On Laxmi Puja you can visit the Garden of Dreams to take part in lighting lamps. A beautiful scene and atmosphere.

This strange festival takes place on the fourth day of Tihar and is only celebrated by those from the Newar community. It is a ritual puja to purify and empower our own body and soul. A celebration of yourself! This usually happens when family members (Or community members) sit on the ground in a long row with mandalas drawn in front of them. They then follow various rituals for themselves. Ending in a bit of a feast as this is also the New Year for Newar.

Where to see the festival – Newari households and communities. You might be lucky to be invited to a Mha Puja yourself or join 32 hrs in Kirtipur to participate.

Chhath takes place about a week after Tihar and is celebrated by Hindus in the lowland areas of Nepal and in India. It is a festival which worships the sun. If you are travelling around, Janakpur is a lovely place to witness this festival. Otherwise, in Kathmandu it takes place at Rani Pokhari. But while that pond is under repair it has been taking place at Kamal Pokhari.

Where to see – Around ponds in Janakpur and at certain ponds in Kathmandu.

There are many more festivals in Nepal, and not forgetting the Nepali New Year around 15 April. I have just highlighted some of the biggest and most interesting. Please ask your travel agent about festivals during the time you are in the country and in the locations you are travelling to on your trek.

Yen Nguyen Follow Yen’s roots are in Central Vietnam although she studied in Ho Chi Minh and worked in Hanoi – covering both ends of the country! Working with the Animal Asia Foundation, Yen turned vegetarian so has her pulse on what vegetarian travellers want. She backpacked around Europe while based in Ireland and is currently living in Nepal with Pradeep and their two dogs. “Our dogs are part of our travel team and we take them trekking throughout Nepal.”
« What To Eat As A Vegetarian In Nepal : Kathmandu Food Guide
Ultimate Guide To Nepal Best Short Trek : Ghorepani Poon Hill Trekking »